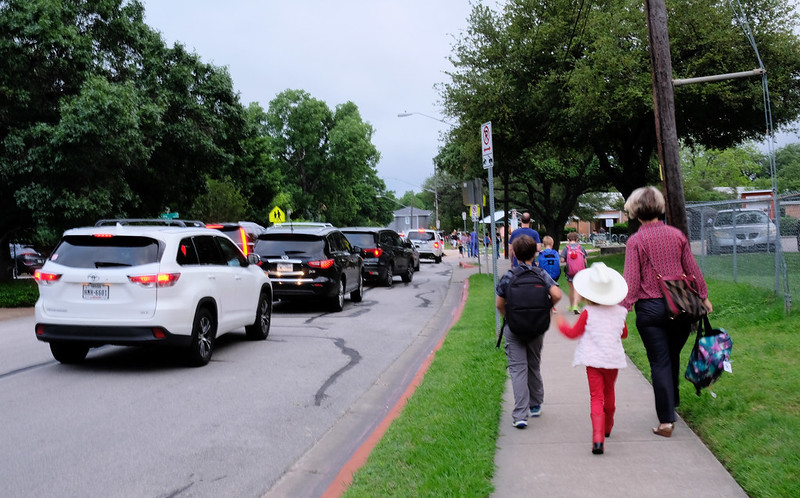 Having ridden the bus a lot as a child, I was surprised to see that, at least in the Bay Area, many schools don't have school bus service.  When I visited our elementary school for a tour, I was surprised to see how many children were dropped off via car.  I was also impressed at how streamlined the process was.  There was a long line of 8-10 vehicles, and volunteers helped shuttle children onto school grounds and to where they needed to go.  Parents or other caretakers didn't even need to leave their vehicles nor open the door for their children.

I was impressed and also a little concerned.  We don't own a car, and I was hoping that, given how mature and streamlined the car drop off process was, that there would be at least evidence of accommodations for those who walked or biked to school.  This was a little confusing, because I know our elementary school is a neighborhood school, and I know that most families that attend live less than 1.5 miles from school.  I didn't see anyone bike or walk to school that morning, but I knew that my own experience was based on a very small sample size.  But I was also surprised since I knew that more folks than average ride bikes in our area, and our area's demographics support a larger number of cargo kid-carrying e-bikes.

This appears to be a convenience-based result that might change as a result of different work commute patterns due to COVID-19.  "About 75% of parents driving their children less than 2 miles to school cited convenience as a reason," states the article, and many parents drop off their children on the way to work.

Biking and walking wasn't even part of the conversation

I think my surprise was more of a result of being a minority in terms of non-car ownership, but I still think that, if we want to even try to achieve lower-carbon environmental goals, walking and biking should at least be acknowledged.  When our school reopened for hybrid learning (due to COVID) in Spring 2021, I was surprised that most of the discussion and information shared about drop-off was related to driving.  There were special zones to drive to for drop-off, parents were warned about potential traffic backups, parents would not have to park their cars once volunteers were staffed in the drop-off zones.  I asked a question about where to store childrens' bikes if our child rode their bike to school, and was met by a bit of confusion.  I was surprised to learn that on many days, our child was the only one, or one of two in her grade who biked to school and needed to lock their bike.

Or the infrastructure and other factors make it impossible

We're lucky that we can walk or bike to school.  There are ample sidewalks, and while the bike lanes are not good for children, they are sufficient for a child who is fairly experienced with riding.  My sister lived less than a mile away from her child's preschool and could not walk or ride there because there was not a safe route to do so.  Getting there would require cutting through a neighbor's yard or traveling on a county highway with no sidewalk.

At our school, other parents mentioned a few issues.  The main one was that they didn't feel that their child would be safe riding on a road shared with automotive traffic.  One parent acknowledged that their child didn't have enough experience riding on a bike at all (luckily there are great places to learn to ride!) and lived too far away.  Another parent whose child did bike to school had her bike stolen from their home after the 2nd week!  (FYI, if your bike is stolen, BikeIndex is an essential resource) In these conversations, I remembered that it took a decent amount of route planning to plot the safest route and minimize potential interactions with automotive traffic.

I hope to be able to change this a bit.  It makes sense that some parents will want to drop their child off on the way to work.  I also believe that many people want to ride their bike more and want their children to ride their bikes more.  So I hope to be able to understand some of the barriers that prevent this and am going to work with our school and Safe Routes to School to try to help more people be able to walk and bike to school.