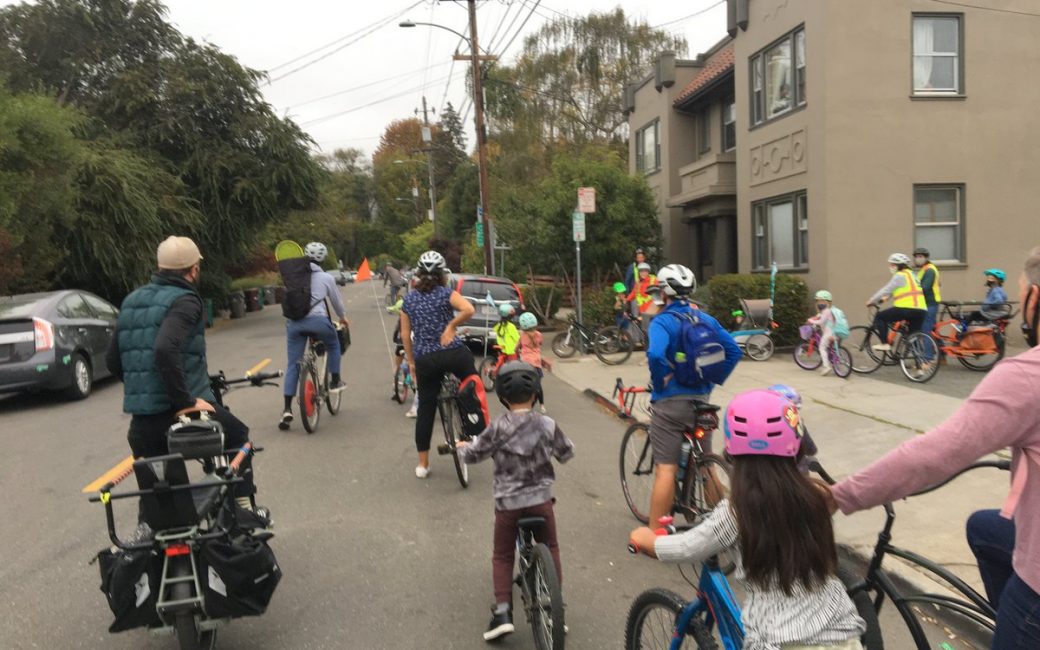 What is a Bike Bus / Bike Train?

A bike train (or Bike Bus, as it has recently been named) is a group of students and parents or volunteers who ride to school together, kind of like a carpool, but for people on bikes.  Some great things about Bike Buses / Trains include:

She provided me with a bunch of resources, including this helpful step-by-step toolkit.

We regularly rode to school before starting this activity.  With the help of Oakland's Slow Streets, we'd already been able to realize some of the above benefits.  We'd see familiar faces on bike or on foot on the way to school.  The ride to school featured a good dose of invigorating exercise in the brisk air, and we've seen friendships grow due to repeated positive interactions together, on a bike.  Our child has become a much stronger rider, and other children have grown stronger as well.  The kids joyfully sprint up a hill that they used to have to walk up.

How do kids get to school?

I am still surprised by the number of students who are driven to school in private vehicles.  I remember spending hours of my childhood on the school bus and a lot of the good and bad that came with it.  In many areas, such as in Oakland, CA, few students take the bus to school at all.  According to a fairly recent assessment, about 55% of Elementary, Middle, and High School students in Alameda County arrived by private vehicle (hand tallies performed by Safe Routes to School).  About 26% walked, 11% carpooled, 3% biked, 2% took the bus, 2% took transit.  COVID has probably drastically reduced the carpooling percentage.

"Colonized by the car"

We received many warnings from our school administration about parking difficulties and car traffic and safety when in-person school resumed earlier this year.  There were several suggested mitigations: Drive to school earlier. Park your car farther away.  Drive safely and predictably.  Drive to the drop-off zone where volunteers help escort students from their cars to the school yard.  These are all helpful tips.  But they all are car-based, and don't do anything to affect the primary cause of traffic: the number of cars driven.

Antonia Malchik recently wrote a somber article about how focus on the car has hurt our collective ability to imagine other ways of life:

Our views of how we get places is so entangled with driving that it’s rare to find regular drivers who can envision a car-free life. Who can see their own community as a place where a child could roam to school or a friend’s house without fear of being run over. Our collective minds have been colonized by the car.

Can we use less cars?

It was hard to read about the problems with drop-off traffic and potential solutions without seeing ones that reduce the number of automobiles on the road.  It's easy for us to imagine getting to school without a car, since we do not own one, but we know this is not typical.  Not everybody lives close enough to school.  Also, some parents need to drop their children off on their drive to work.

Our built infrastructure heavily favors automobile speed and efficiency above other factors.  And we aren't completely car independent: we still rent a car and get rides from others from time to time.  I estimated (with school district data as a source) that 50% of families live within 1 mile, and 70% live within 1.5 miles, and an impressive number of students already walk to school.  I hope that this can be improved upon even more, so that walking and biking can become even more viable options.

Safe Routes to School: An organization that promotes healthy walking and biking to school

How do you start a Bike Bus / Bike Train?

I felt pretty intimidated at first.  I had organized bike rides before, but they were either with only adults, or I didn't yet know who to talk to within the school or parent community to spread the word.

1. Research: What are other examples of bike buses / trains?

I looked for other examples of bike trains:

Megan from Bikabout created some beautiful maps and time tables for the Bike Train in Hood River, Oregon.

A post shared by May Street Walk and Roll (@maystreetwalkandroll)

There are an incredible amount of children riding with the Bicibus in Barcelona, Spain.  Apparently, originally they were asked to shut it down by police due to perceived safety issues.  Parents persisted, and now the Bicibus has a police escort.

I roughly followed the steps in the Alameda County Safe Routes to School toolkit.  I don't want to just copy their guide, so I'll just add my own experiences to the steps they already had laid out.  I had to do things in a slightly different order.

In order to figure out the scope of the Bike Bus / Bike Train and where routes could be, I needed to find out where potential riders lived.  I assumed that clusters of students could then be led by one or more parent route leaders.  The biggest issue I had was that our family was fairly new at the school (due to a mostly-online COVID) year and I didn't know who to reach out to to get the word out.

Things fell into place when I was connected to the right people.  Alameda County Safe Routes to School provided a nice Google form and a flyer, and I wrote a small paragraph for the email newsletter.   I learned where I could post flyers as well.

I asked some of the Safe Routes to Schools coordinators I was in touch with and others who ran the program at other schools for tips.  I think one of my learnings was that each school is run quite differently, and there may be a different path one needs to take to make the Bike Bus / Bike Train happen due to this.

The email newsletter seemed to be the most effective way to reach people, and the Google form had all of the information that I needed to start creating routes.

We live a little farther away from our Elementary school than most others, so a lot of the addresses were not too far from our route to school.  That meant that I got to be the route leader for the first ride 🙂

I'd like to continue doing the Bike Bus / Bike Train, at a frequency of maybe once per month.  Parents could probably rotate duties, but all of the parents helped keep everything going as smoothly as we could manage.

I used Google My Maps to map family locations, and outline potential routes.  I created 3 route options, each with its own pros and cons.  One route avoided a busy retail strip, but was in a bike lane alongside freeway-bound traffic.  Another was the most direct, but followed that busy retail strip for a few blocks.  And the other involved riding on the sidewalk and merging onto a road with a skewed/acute angle intersection which resulted in higher traffic speeds and lower visibility.  I asked for feedback from parents and we eventually chose the route that included the retail strip.

My child and I started riding the route, and timed how long it took to reach important intersections.

I haven't yet been able to schedule a Bike Rodeo or a BikeMobile visit, but hope to work with our elementary school to do so this school year.

My biggest worry was that the ride would become unsafe due to some interaction between the bike bus / train and automotive traffic.  This turned out to not be the case, I think in large part due to the high number of parents involved.  Any child that had difficulty riding in a straight line or looking out for hazards was quickly tended to by a parent.

We passed by a lot of students walking to school near the end of the ride and were greeted with excited kids who marveled at how many people rode their bikes.  Some of the more experienced student riders were able to remain patient, after some instruction, and slow down a bit to keep the group together. 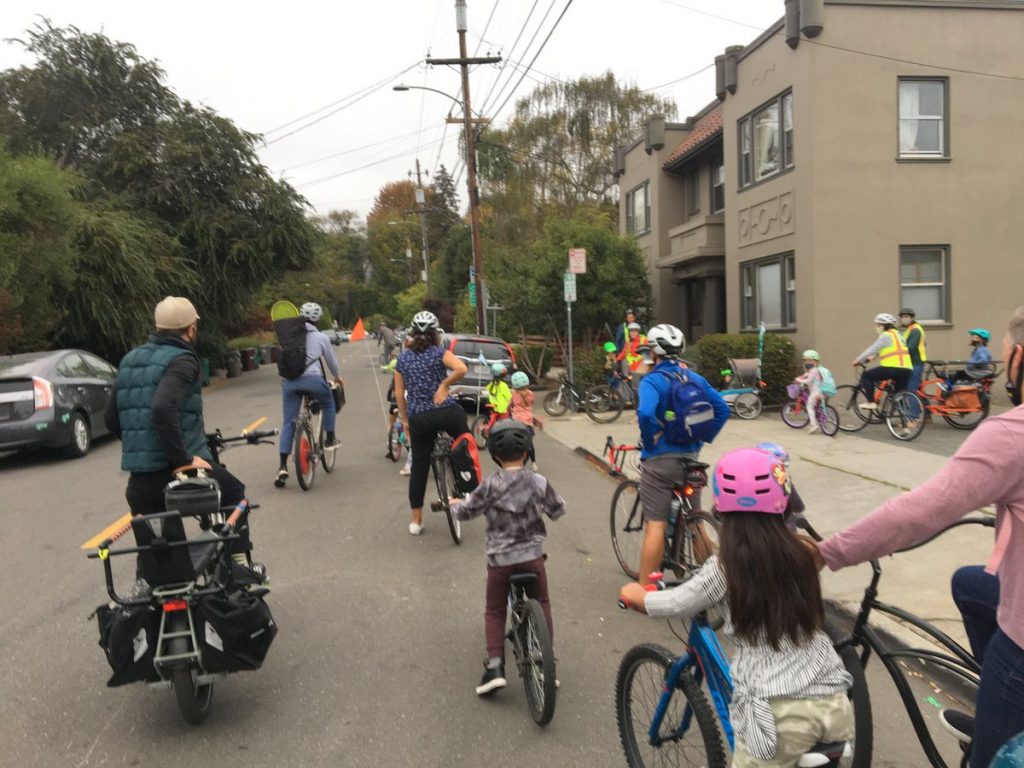 We filled out the main bike rack and take up most of one of the secondary bike racks.  This felt like a great accomplishment!

I sent out a list of rules, tips, and guidelines to parents for their children before the ride, and tried to repeat them to the best of my ability on the ride itself.  I augmented the Safe Routes to Schools list a bit with a few of my own rules:

Things to bring (other than the bike, of course):

I felt that calling out was particularly important, because in my experience, most kid crashes during group rides had been somehow related to kids riding too close together or colliding by mistake.

What the experts say

I hope to add more information here as I learn more from others who have run great bike bus / train programs.  If you've successfully run one and would like to contribute, feel free to leave a comment at the bottom of the page:

Alternatively, if you have questions, I'd be happy to help to the best of my ability!