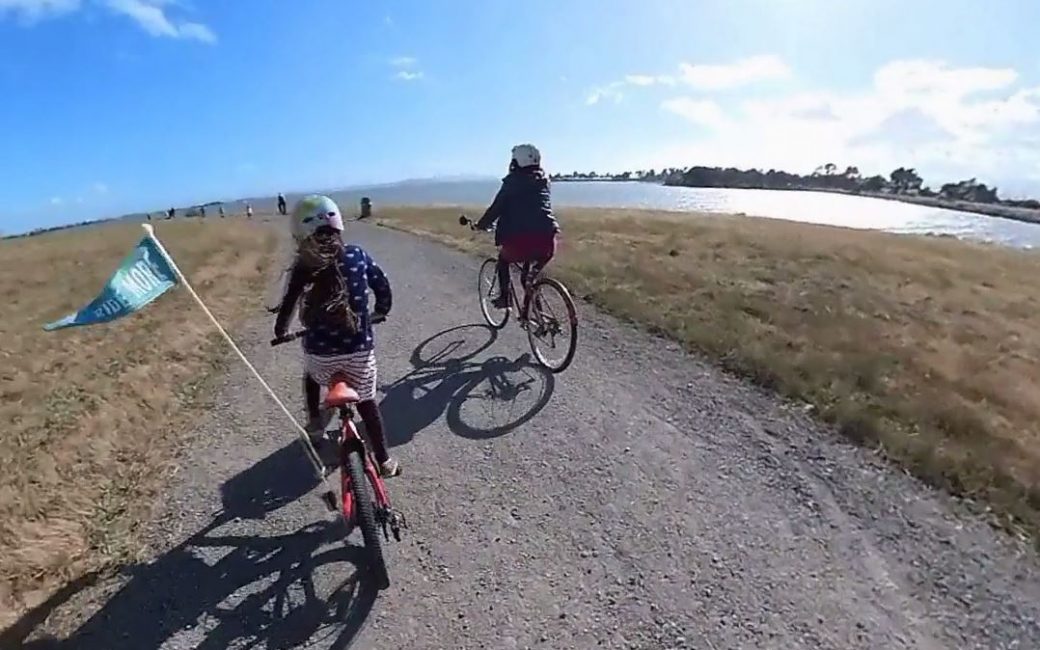 Riding on the gravel paths of Berkeley’s Brickyard Cove Park We took the group of kids to bike on a family ride at the new Brickyard Cove park in Berkeley at the shoreline.  It recently opened earlier this year.  Apparently it had been privately owned land that had been a dumping ground for decades.  Originally slated for a mall, after zoning battles, it appeared to have been purchased by East Bay Regional Parks in the late 90s.  And now it has finally been developed into a park in 2022. Brickyard Cove has beautiful views The location is nice.  It’s right off of the University Ave pedestrian bridge, aka the Berkeley I-80 bridge, and is right next to the Bay Trail.  It offers expansive views of San Francisco, the Emeryville Marina, the Bay Bridge, the Golden Gate Bridge, the Berkeley hills, […] 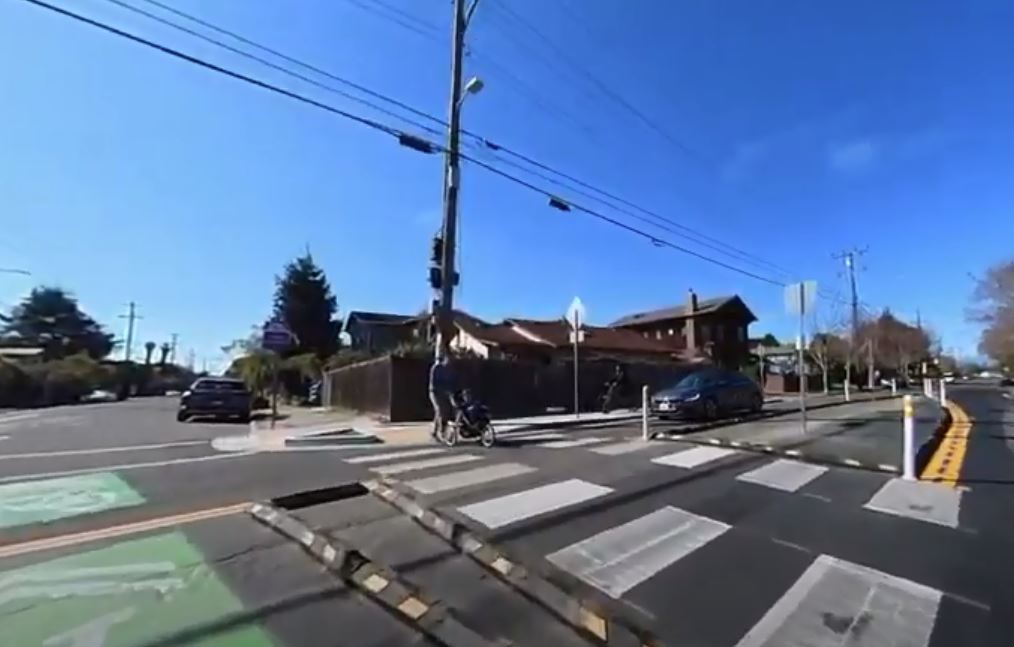 Building the right infrastructure for people: Traffic Calming in Berkeley There are a number of new quick-build traffic calming improvements sprouting up all over the East Bay. Crossing Dwight Way at California street as a pedestrian or person on a bike was traditionally difficult.  It’s wasn’t terrifying, but the traffic speed and volume made feel like a bit of an adventure to cross.  California St is far enough from a traffic signal that might create breaks in the traffic.  By the time drivers reach this intersection, they have had a chance to accelerate to faster speeds. The City of Berkeley has put in temporary traffic improvements as part of Phase 2 of the Dwight Way/California Street project.  The City of Berkeley will record data and use this to evaluate whether Phase 3 permanent improvements will be implemented.  I hope this […] 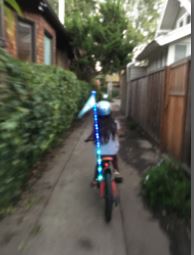 Family bike riding around Oakland and Berkeley Our child is old enough to pedal themselves around to school, the library, and to sports practice.  Sometimes it’s hard, but usually we have a good time getting to where we need to go.  We get some exercise, take in our surroundings, wave to neighbors, give names to cats and dogs, and appreciate random sidewalk finds. And we can get around in an environmentally-friendly way. We ride around with a set of bike pole lights that I have been developing for a while.  The bike flag lights make us pretty easy to spot. If you see us, wave and say hello! I made our bike pole lights (aka the “Bike Beam” light) to keep my child visible When we first started riding around on neighborhood streets, I realized that my child was hard […] 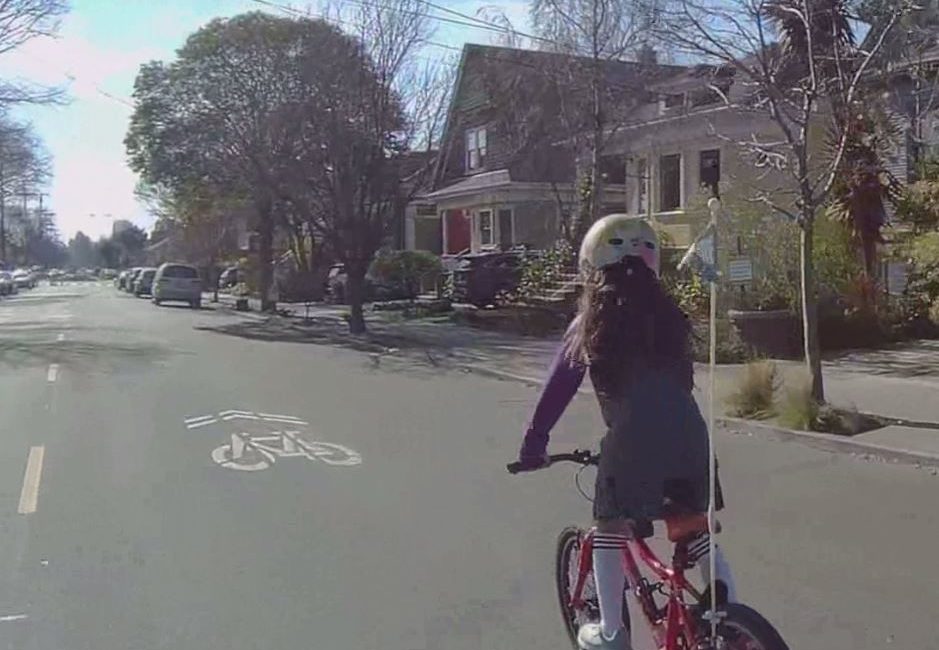 I’m enjoying being a bike soccer dad. I guess I’ve become a soccer dad now.  Our kid has practice on the weekends, but we bike to the field instead of taking a the stereotypical soccer mom or soccer dad minivan or SUV.  We do it because we rarely drive, but there are plenty of benefits to doing so.  It’s good exercise, and it’s a great way to get outside and enjoy nature.  It also helps reduce car traffic congestion and pollution. It’s about a 3 mile ride that takes us 20-25 minutes. We selected our route based on Oakland’s Slow Streets (which are being taken away soon, sadly!) and other low-car-traffic roads.  Berkeley has done a decent job adding physical barriers on designated routes to promote safety by slowing the flow of automobiles.  There are a couple of hairier intersections […] 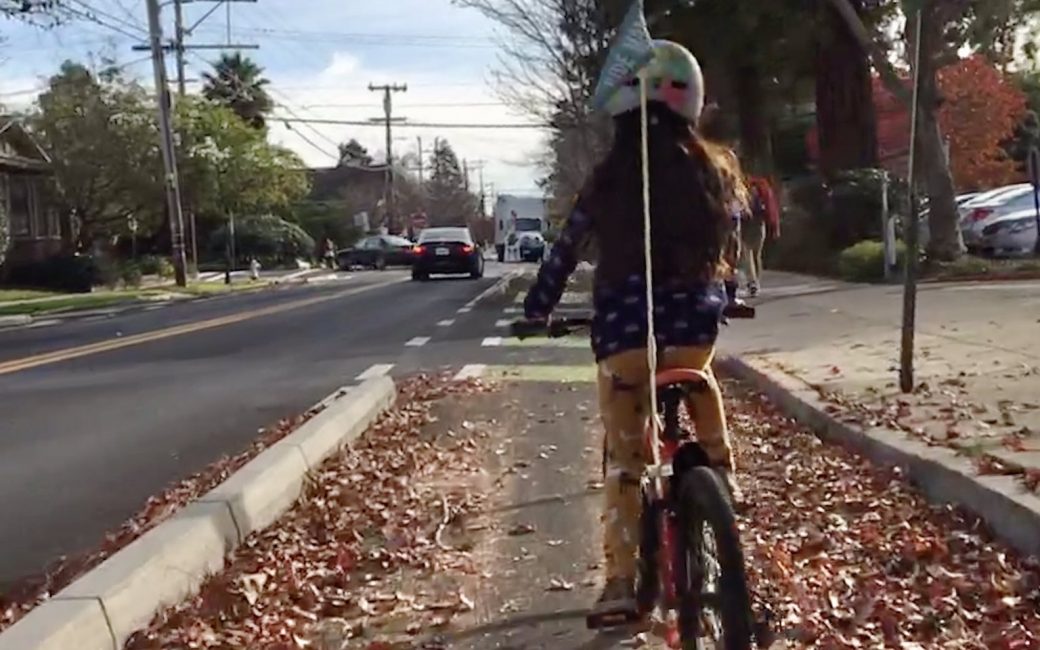 Protected Berkeley Bike Lanes on Milvia Street We rode the new Milvia Street protected bike lanes in Berkeley again a few days ago.  These lanes are protected from automotive traffic in a few different ways.  There are concrete islands with metal rails in some sections (by Berkeley High School, for example) and then simply concrete barriers in other parts.  There are a few unprotected paint-buffered areas.  In general, the lanes allowed us to feel more comfortable riding around Berkeley with a physical barrier between us and moving automobiles. We were on our way home from getting lunch.  Our route took us south on Milvia Street from near the Cal campus in order to get back to Oakland.  It was a short but enjoyable stretch.  A few students were milling about and the vibe was nice and calm – perfect for […] 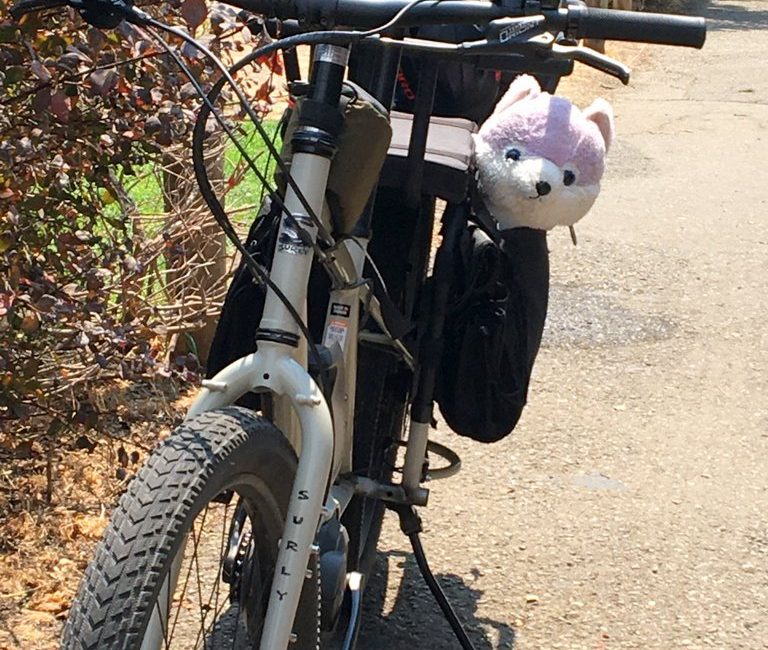 When friends ride along on an electric cargo bike We rode our bikes to Strawberry Creek Park in Berkeley for a birthday party. I saw this cute setup on a Surly Big Easy cargo e-bike.  It’s a long-tail cargo bike with full-sized wheels.  It is great for carrying groceries, kids or other bikes, and it has an electronic assist.  The bike is set up with a Thule/Yepp child seat in the back.  The panniers are also a perfect place to take a stuffed animal buddy along for a ride.   I took one for a test ride once. It felt stable even with an adult on the back rack. Or follow along for updates: 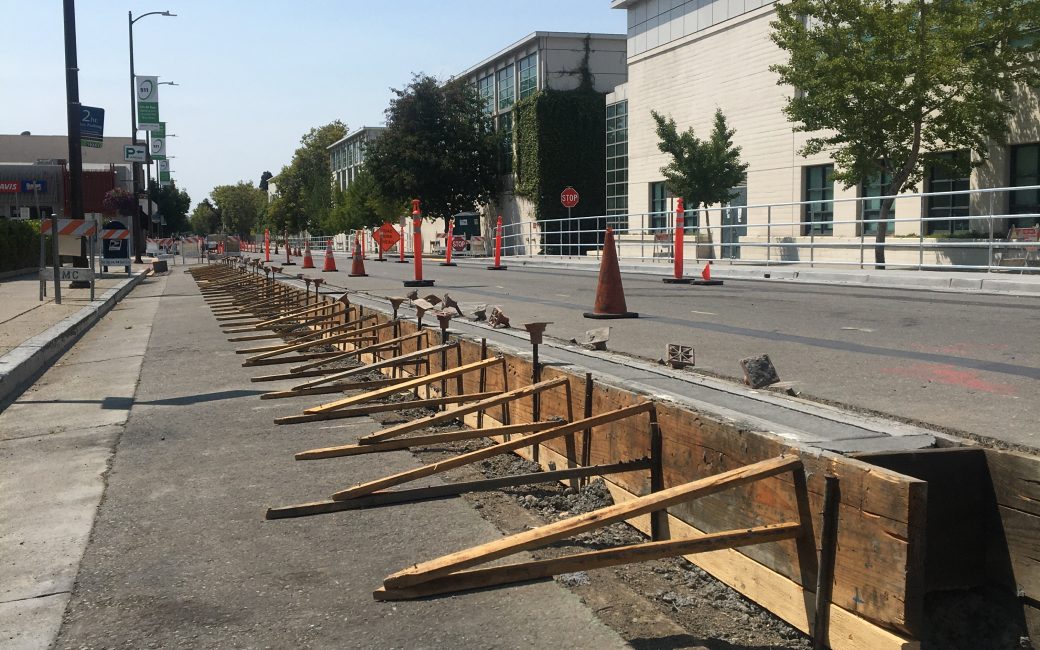 Protected lanes in Berkeley! I noticed a lot of new construction activity on Milvia Street in Berkeley a few months ago, after visiting Sports Basement and Missing Link in search of a new bike rack.  I was pretty excited to see that it looked like protected lanes were going to be installed.  Recently, coming back from University, it was nice to see the construction taking place around Addison, Center, Center, and along Berkeley High. Why protected lanes? I’ve asked a lot of friends what would make it easier for them to ride their bike more.  Most have answered that they’re scared of automobile traffic.  While painted bike lanes can be helpful, there’s not much preventing a distracted driver from drifting or veering into a bike lane and harming a person on a bike.  Protected bike lanes are great, because […] 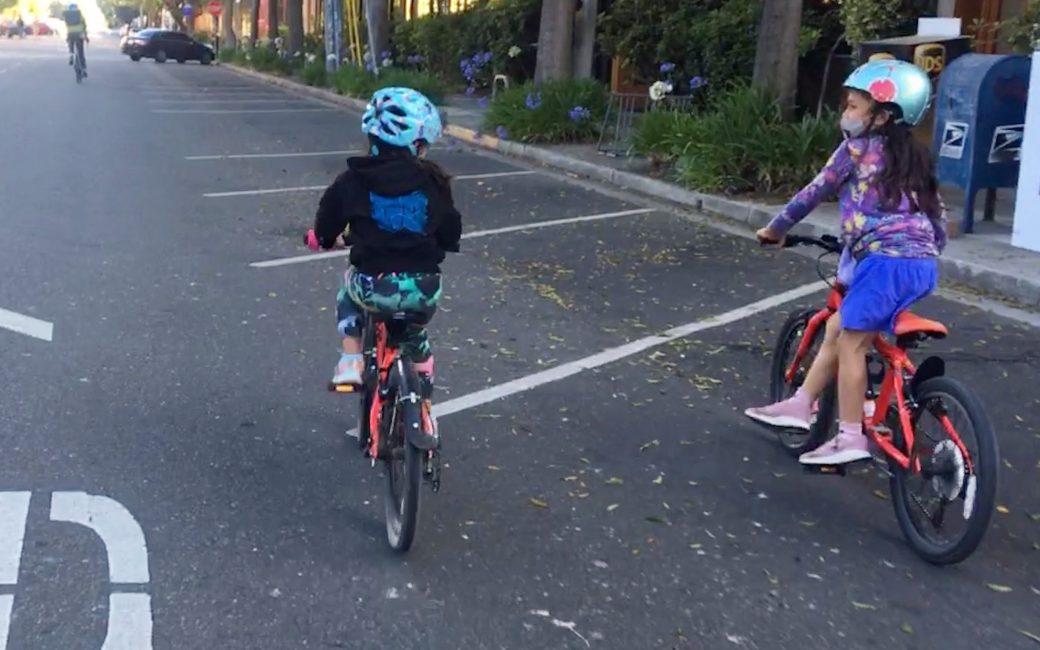 We went for a bike ride through Berkeley last week with some friends and kids.  Our friend’s child has a 20″ Frog 52 and we have a 20″ Opus Doppler.  Both red.  We enjoyed the Ninth Street bike boulevard and riding around the makeshift traffic circles (aka Healthy Streets Traffic Octagons)Third (and final, for now at least) Healthy Streets quick-build traffic octagon installed at 9th and Page! @CityofBerkeley https://t.co/Z2eIZVCGn9 pic.twitter.com/Kg8gbn7Z1C— Walk Bike Berkeley (@WalkBikeBerk) May 20, 2021The kids enjoyed singing, racing, playing games, and just chatting while riding, and I’m sure we’ll repeat this sometime in the future.We rode through West Berkeley and got food at Pollara Pizzeria and Tacubaya on 4th street when everybody got hungry.  Then we headed home. Or follow along for updates: