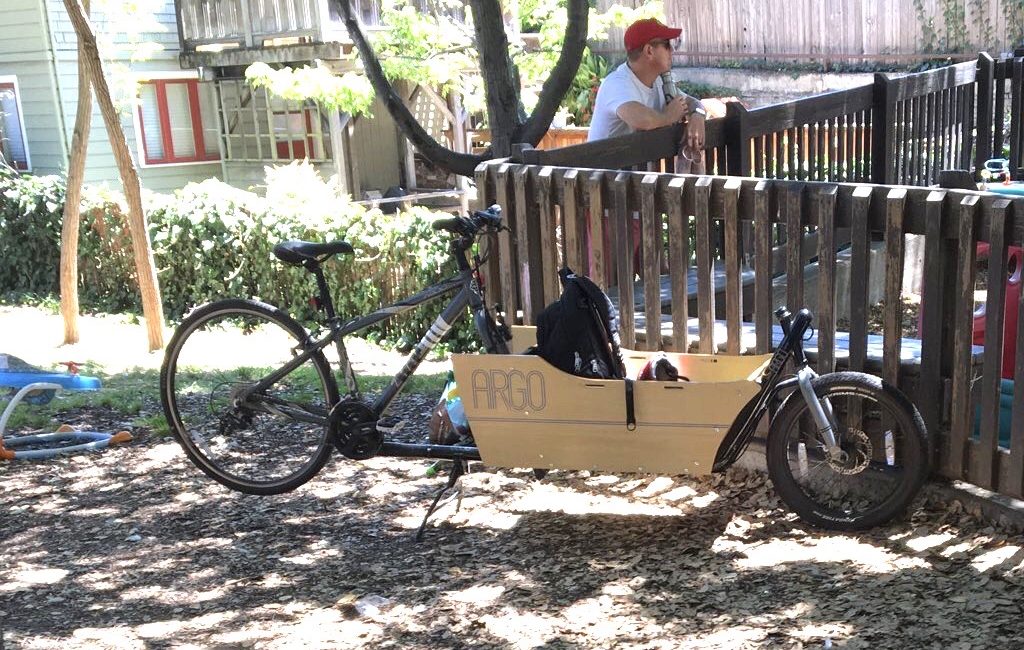 An Argo Cargo Bike at the park

The Argo Cargo bike attaches mainly at the front fork and the bottom bracket, and requires a minor modification to the brake cables to connect your brake lever to the brake on the front wheel.

I saw a parent ride in on their Argo Cargo Bike with their kids in the front, and asked about it, since I had never seen one in person.  She said it was great for taking her two kids around, and that her partner and her had set it up on her hybrid bike so she could take the kids around together.  The Argo Cargo bike has enough room for two children to sit side by side in front of the parent riding.

There are some kits where you remove your fork and 700c or 26" front wheel, and replace it with a 20" wheel with a front rack.

For example, there is this Crust Bikes Clydesdale Fork conversion kit:

It allows you to carry some cargo in front.  Space is made available above the wheel by using a smaller 20" wheel.

Husky Bike Tech is developing an electric version of this idea, which they call the CargoDrive.

Husky's is especially interesting, because you don't need to remove your own fork.  The smaller wheel, rack, and motor and batteries all attach to your existing fork.

The Original: The Xtracycle Free Radical

The Xtracycle Free Radical replaced your rear wheel with a half-frame that attached to your bottom bracket and rear dropouts to extend the length of your bike.  It allowed you to put on a larger cargo rack and carry bigger things, like a surfboard or kids. It bolted on pretty easily and was available at a fairly low price ($300 when first introduced!)  Xtracycle no longer makes them, but they can be found used for a very affordable price.

1 thought on “Nice Bikes: An Argo Cargo Bike kit in Oakland that converts your bike into a practical front loader”