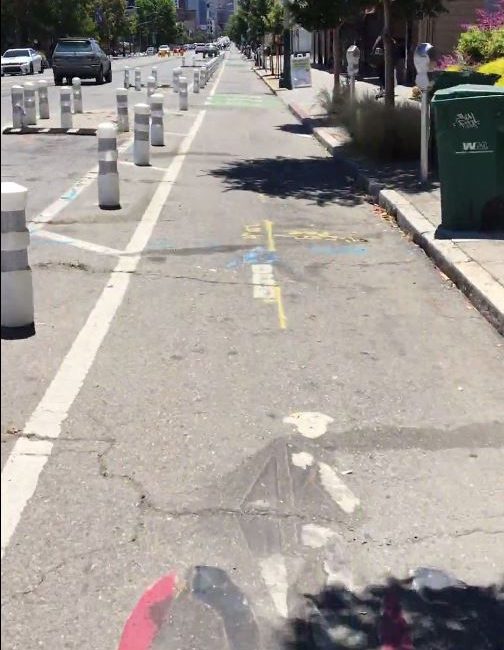 I was really disappointed to read that OakDOT is planning to remove Oakland's first-ever protected bike lane presumably after pressure from a lot of pressure from the KONO (Koreatown Northgate) business improvement district.  Initially, I heard a lot of mixed reviews from cyclists about the protected lanes in the KONO district, mostly because of parking confusion.  Drivers would park their car in the middle of the bike lane, despite markings, because they expected parallel parking to be at the curb rather than offset from the curb.  This would then cause a big problem for a bike rider when the lane would be fully blocked by a parked car.

After everyone got used to this, I felt that it worked a lot better.  I feel that it's a lot safer because there are physical barriers (parked cars, bollards) between someone on a bike and moving automotive traffic.

Apparently Oakland has already been awarded a grant to finish making the lane protected by converting plastic bollards to concrete barriers and planters, for a nicer aesthetic and greater level of protection.  But OakDOT now plans to remove the protection, and replace it with more traditional and less safe painted stripes.  This will make it easier for drivers to veer into the lane unintentionally (if distracted) or on purpose, to double-park.  This is way scarier for someone on a bike and will make it necessary to weave in and out of the bike lane to avoid such obstacles.  This is worse and detracts from the safety portion of the "Complete Streets" policy that the Oakland City Council adopted in 2013, and the Telegraph Avenue Complete Streets Plan in 2014.

That bike lane is the easiest way to get downtown and back uptown, and I was glad to be able to ride on it while it still exists.