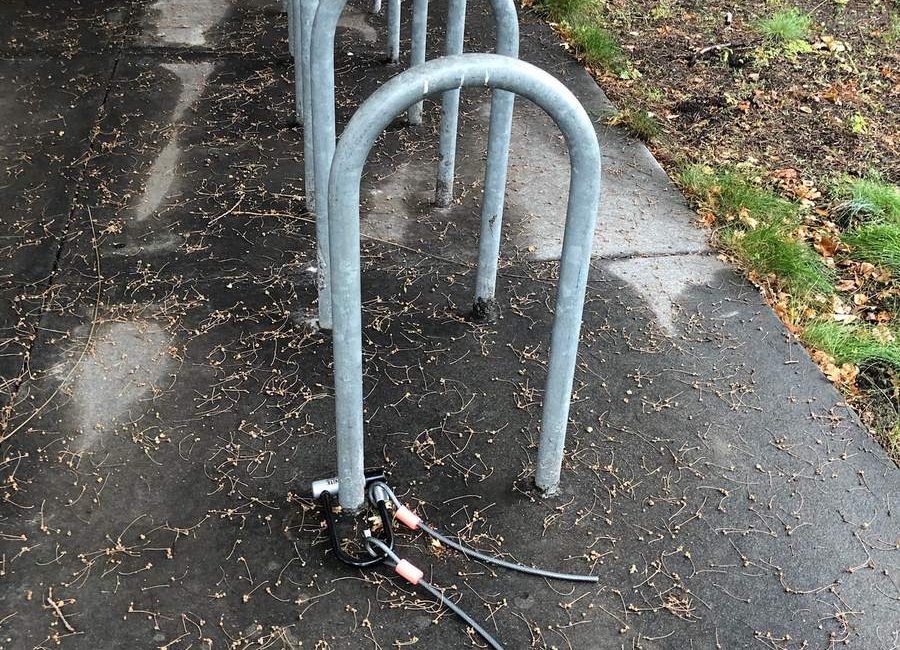 How are bikes usually stolen?

Bikes are great. They are a convenient, eco-friendly way to get around, and help you get healthy physical activity. They also allow kids to independently transport themselves.  Bike theft is a huge issue especially in the Bay Area. When I first moved here, I bought a “beater bike” for errands and commuting, because I didn’t want to risk having my nice bike be stolen.

I’ve read and gathered some data from Craigslist post over the years.  I’ve been casually studying and observing bike theft for more than a decade.   Bikes are stolen in several ways, but some are much more common.

Bikes are often stolen during a home break-in

Perhaps surprisingly many are stolen during a home break-in.  People often store their bikes in their garage, and there has been a lot of recent property theft from garages. This has happened recently to two friends.  Locks were broken/compromised and then thieves removed their bicycles that were not otherwise secured to something.  (And it would feel a little ridiculous to lock your bike, inside, in your own residence, so no judgement here.)  Other friends had left bikes in their backyard, and thieves have hopped the fence.

Bikes are also stolen from indoor areas such as a parking garage. Residents or workers leave their bikes for an extended period of time, and thieves can browse these bike racks for an easy target. Often, they can have prolonged access to this area to perform more destructive forms of lock removal.  Also, many newer apartment and condo areas feature a group bike parking area.  Sometimes thieves can gain access to this room and remove bikes that are not locked.  Or, as in the case of the bike garage, thieves may have access to this room for a longer period of time and have time to use power tools to aid their theft.

Bikes locked outside are sometimes stolen

According to the Craigslist listings, this happens less frequently than bikes being stolen from an indoor facility, residence or garage.  But bikes are of course stolen when locked outside.  Or left outside briefly. Often it’s inconvenient to lock a bike for a quick errand, and an opportunistic thief can take a bike in a matter of seconds. Quick moving thieves can use angle grinders to cut even the nicest u-locks. Battery-powered angle grinders are readily available, as well as long-armed bolt cutters that can cut through cable locks and thinner u-locks.

My brother-in-law’s bike was stolen once, and we could find no trace of a bike or lock ever having been there. Not even metal filings on the sidewalk. We’re not sure how it happened, perhaps a lock was picked?

Sometimes bikes are poorly-locked even with proper locks.

In Portland thieves were even cutting the racks themselves to remove the bikes and their locks.

How can you prevent (or deal with) bike theft?

Get a good bike lock (a U-lock or D-lock)

A high-quality U-lock made by a reputable company (for example, Kryptonite, Abus, Hiplok) will help. Some quote a ballpark figure of spending about 10% of the value of your bike on a lock. You may have seen videos from the Lock Picking Lawyer on Youtube, all of these locks are pickable.  But I think most thieves that bypass locks do not pick them, but try to cut through them or destroy them.  Hiplock makes a lock that is more angle grinder resistant – it has a giant diameter, and a coating that is more resistant to angle grinder attacks.  It is not cheap though.

Your lock won’t matter too much if it’s not used properly.  The bike below is has the U-lock through the wheel and on the rack, and a cable lock that goes above and around (but not through) the frame.  A thief could easily remove the front wheel with an allen wrench and then have the rest of the bike. 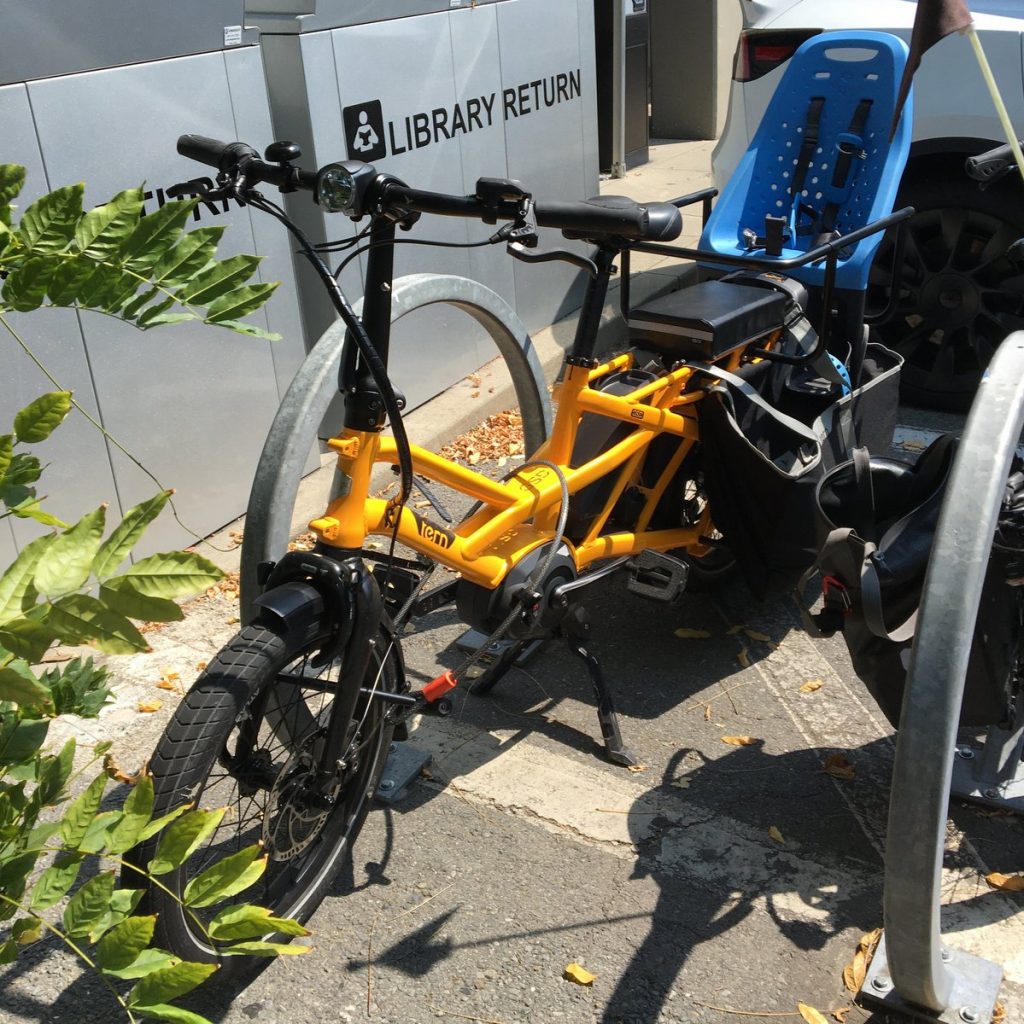 A better technique is to make sure the U-lock goes through the frame of the bicycle and around the rack. Then the cable can go through the U-lock and through a wheel.  Bike East Bay has a good guide on good locking technique: 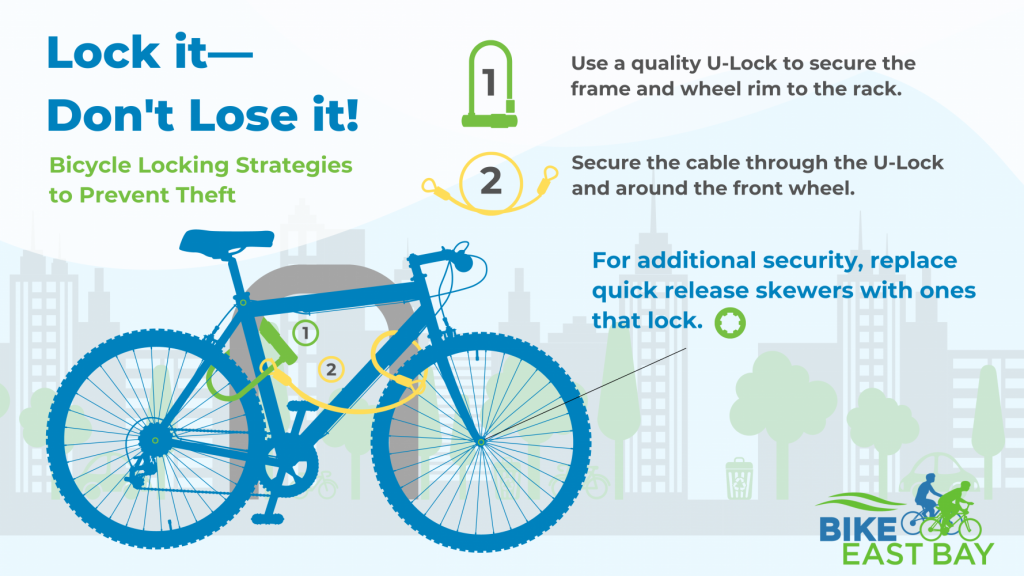 Track your bike with an AirTag

Apple makes an inexpensive ($25-29) tracking device that you can attach to a bike.  I make an AirTag mount for a bike that hides under the water bottle cage. You can periodically review the location of your bike, or be notified if your bike is “left behind” and no longer near you.

Use BikeLink or other bike lockers

In the Bay Area, BikeLink offers an inexpensive locker/cage for your bike.  There are BikeLink lockers at many BART stations and other locations.  I have used these with success in the past.  The bike locker rental fees are cheap – usually 5 cents per hour.

Get a beater bike

How can you recover a stolen bike if you’ve been a victim of bike theft?

I’ve been able to help recover one stolen bike this way. Stolen bikes often end up at flea markets, or local chop shops (you’ll see piles of bikes on the side of the road, sometimes).

Register your bicycle at BikeIndex.org

Take a photo of your bike.  Take note of the serial number of your bike. Usually it is stamped into the metal under the bottom bracket (where the cranks go) of your bike.  You can take a photo if that’s easier.  Then post a photo and description of your bike to BikeIndex.org.  It’s the most central, and as far as I know, most used database of bike ownership. I frequently check it to see if there are matches if I see a suspicious listing on Craigslist

Track your bike with an AirTag mount or other tracker

As mentioned in the above section, a hidden AirTag can help you find out where your bike is once it’s stolen.  It’ll likely take a while for it to be discovered by a thief.

You can let your local community know to be on the lookout for your bicycle.  It really helps to share a photo so people know what to look for.  You can also scan local listings for your bike.

Thanks for reading this. I hope that some of these tips can help give you information to help reduce the chances of your bike being stolen, so you can enjoy riding with more peace of mind.