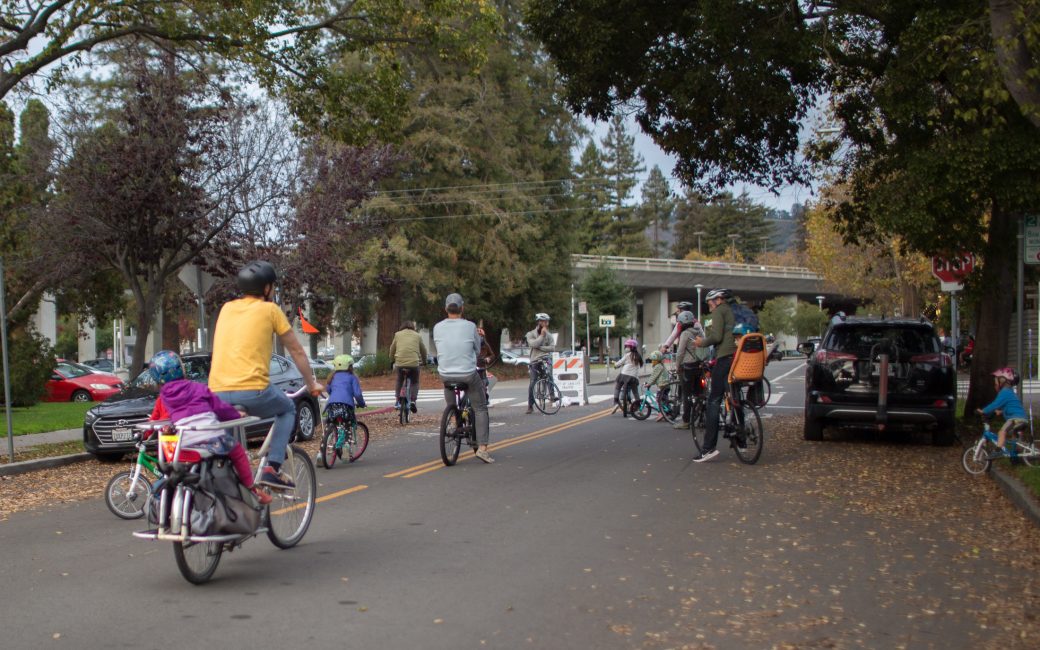 Contents hide
1 Bike Parades for kids
2 How did the bike parade start?
3 How do the bike parades work?
4 Have there been any conflicts?
4.1 The aggressive driver
4.2 A few small bumps and crashes
5 Great things that have happened
5.1 Kids learn to ride bikes, more
5.2 Kids learn to ride bikes with others
5.2.1 Navigating our infrastructure and automobiles
5.2.2 Kids biking with each other
5.3 Kids practice independence
5.4 Kids get exercise and physical activity
5.5 Building community by bike
6 What else did we learn?
7 What types of bikes do kids and adults ride?
7.1 The kids
7.2 The adults who carry kids
7.2.1 Trailer
7.2.2 Rear bike or front bike seat
7.2.3 Cargo bikes or cargo e-bikes
7.2.4 Trail-a-bike
8 What's next for the Kids Bike Parade?
8.1 I’m trying to make it easier for families to ride bikes together by sharing experiences and developing helpful products.
8.2 Or follow along for updates:
8.2.1 Instagram
8.2.2 Twitter
8.2.3 Facebook
8.2.4 Related Posts:

The kids bike parade is a way to let kids play, ride bikes together and learn to ride safely.  Children and adults make new friends and build community by bike.

How did the bike parade start?

Earlier on in the pandemic, we learned that COVID spread mostly through poorly-ventilated air. We tried to think of ways to still foster social interactions between children with a lower risk profile.  Our family and a lot of others have gone with their kids biking to spend time outdoors.
We started by turning a birthday party into a evening bike ride.  Kids had fun biking together and being able to see each other not on a computer screen! Parents got a chance to ride with their kids and others. Neighbors were treated to a lively mini parade.
A few parents loved the idea, so we decided to do one every month.
This was all made a whole lot easier by the Slow Streets program put on by the City of Oakland.  Streets were partly closed to automotive traffic, and in turn opened to foot traffic and bike traffic. The Slow Streets reduce the worry of the existential danger of being hit by someone driving a car. This allows kids to have more fun and learn to ride in a mistake-tolerant environment.

How do the bike parades work?

We selected a start point at an intersection on the closest Slow Street to where we live.  Then we plotted a route that followed the Slow Street as much as possible.  This resulted in mostly an out-and-back ride for us, since we wanted to minimize having to cross busier streets with a lot of automotive traffic.  Our route is a short 2 miles long.  This is a decent ride for a child on a scooter, balance bike, or training-wheeled bike.  It's kind of short for the older kids (6-8 years old) who are riding their own pedal bikes.  But they don't seem to mind.

We end the ride in an open area where kids can play, and have recently picked up pizzas at the end of rides to keep kids and adults from getting hangry and so that dinner can be taken care of as well.

Have there been any conflicts?

The parade has been mostly free of any major problems.  We did have one experience with an angry driver.  Our riders were stopped at an intersection on a Slow Street when a driver approached from the opposite direction.  It was not clear at the time, but the driver intended to proceed straight across at the intersection, but their path was blocked by Slow Streets signs.  We were trying to wait to allow the driver to proceed and go where they needed to go.  We were blocking their path, and they were blocking our path.

This has happened other times in the past, and usually the driver patiently waves kids and other bike traffic along so they can continue driving without kids in their way.  In this situation however, the driver drove into the intersection, and stopped their car 3-5 feet away from the adults and children who were stopped at the intersection.  The driver looked clearly frustrated (and perhaps embarrassed?), and a couple of parents intervened to try to calm him down and get the kids out of the way ASAP.  My guess is that the driver, a neighbor, had a building resentment to the Slow Streets program and was allowing his frustrations to get the best of him.  Him driving his car towards a pack of children was a very aggressive, reckless, and slightly terrify maneuver.

This has been the only incident in nearly a year, but as a precaution, we no longer route the bike parade on that road.

A few small bumps and crashes

Luckily, the rest of the conflicts have been minor and have hopefully been good learning experiences for the children.  There are sometimes small crashes between children that ultimately help them learn to modulate their speed, direction, and reactions.  We all learn by making mistakes and learning from them, so it's great that kids can do this in a safer environment.

Great things that have happened

In the time since we have started these parades some strong-willed and determined kids have graduated from trailer or back seat of a cargo bike, to balance bike, to a bike with training wheels to a two-wheeled pedal bike.  It's amazing to see the progress.  One child in particular tried very hard to keep up with the bigger kids at first.  She had a frustrating time, but kept at it whenever she rode.  This last ride, she was really proud of herself for finally being able to hang with the older kids on her new Park pedal bike.

For some kids who may not ride a bike as a normal part of their daily life, the parade provides a fun reason to hop on and start pedaling.

Kids learn to ride bikes with others

Navigating our infrastructure and automobiles

There are a few stop signs and traffic lights along our route, and these allow kids to practice stopping safely while looking out for automotive traffic.  They learn when and where to stop, what to look for, and when to proceed.

Kids biking with each other

Kids learn to intuitively keep a safe distance between each other, and modulate their speed and direction as necessary to avoid a crash while maintaining an easy chatting distance.

Though adults are nearby, kids get to independently move themselves where they need to go.  This can help them build confidence and become happier and safer.

Kids get exercise and physical activity

The actual parade involves a bike ride of decent length for kids.  But the benefits extend past that.  When kids become adept at riding their own bikes, it makes riding to other places more possible.  A drive to a park can become a ride to a park.  A school drop-off can become a family bike ride.

Another wonderful thing is that the Bike Parade has helped kids and parents in the neighborhood meet each other and form new connections.  We've been fortunate to meet so many of our neighbors and community members through these rides.

What else did we learn?

I picked up a bunch of lights for adults and kids who need them if they are getting home in the dark.  The kids love having their own lights.

What types of bikes do kids and adults ride?

I don't get tired of seeing other bikes, and so it's neat to see what other people ride.

There's a wide range of kids bikes.  Most of the kids in the 6-8 age groups are riding bikes with 20" wheels.  One of them is on a 24" bike.  Kids are riding Cleary, Woom, Giant (and Liv), Opus, SE, Guardian, Specialized, Cannondale, Islabike, Frog, KHS, and Park bikes.  One kid rides a vintage children's Scott bike.  Most of the major brands are well-represented and make very usable bikes for kids.

Some of the smaller kids are currently on 14" Woom or Park bikes, and there have been a few 16" Islabike and Specialized bikes.

Those who are still on balance bikes ride a Woom or Strider.

The adults who carry kids

Parents with children too small to ride their own bike (or who choose not to) have a few options:

What's next for the Kids Bike Parade?

We hope to keep this going as long as we can.  I hope that the Slow Streets stay indefinitely so that this is easily possible.  If you have any questions or want any tips for starting your own bike parade, please feel free to email or leave a comment.