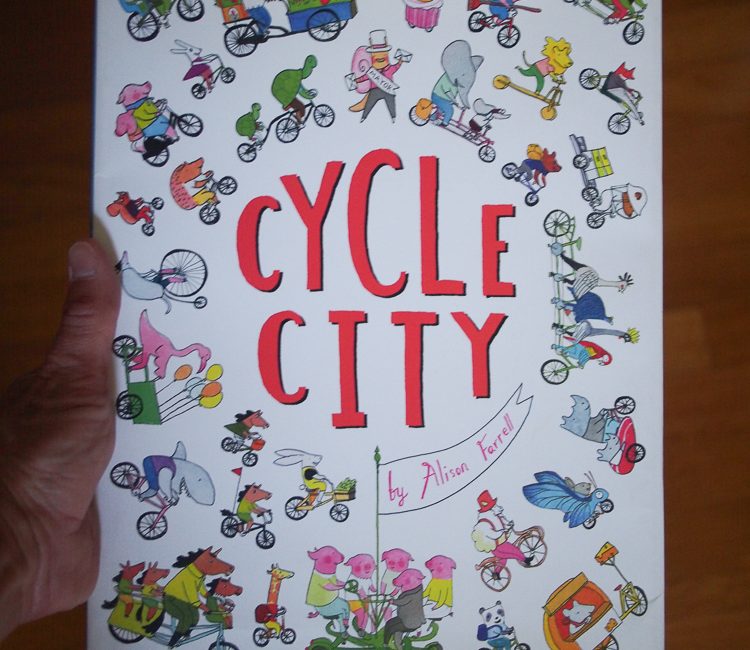 Bikes are fun to ride and fun to read about.  As parents who spend a lot of time riding our bikes with our kid, we try to read bicycling books as well.  Since May is Bike Month, I wanted to share some of the bicycle books (and bicycle-related books) that we've read and enjoyed.  I've been surprised at all of the great kids' books about bikes out there!

Duck on a Bike - David Shannon

"Easy to read and it's simple but funny."

We found Duck on a Bike as a sidewalk find while walking around Portland.  It was great timing.  We needed something to keep our kid occupied, and this book was fun, bike-related, and serendipitous.  It's a silly story about a duck that commandeers its own bicycle.  It has engaging and detailed illustrations and rainbow streamers.

I asked my child about the book.  It has "funny and bright and colorful" illustrations.  "It's easy to read and it's simple but funny.  It make me feel like ducks are really smart."

David Shannon is the author of a large number of children's books.  His Scholastic page states that he's written more than 30.

Cycle City was gifted to us by a thoughtful biking friend.  Thank you!

Cycle City is an incredible illustrated book, in the style of a updated, modern Richard Scarry book.  Animals go about their day while Mayor Snail plans for the Starlight Parade. There's pretty much every type of bike imaginable, each suited for each character's needs: A pedicab, tandem, front-loader, tall-bike, gelato tricycle.. what if we could all live in such a world?  Kids have fun searching and finding characters within the beautifully detailed illustrations.

Alison Farrell lives in Portland, OR and herself rides a front-loader cargo bike with kid.  There's a lot of Portland baked into the book, and you can read about some of the background in Bike Portland's interview.

The Adventures of a Girl Called Bicycle - Christina Uss

The Adventures of a Girl Called Bicycle, by Christina Uss might have been the longest book we'd ever read with our child at the time.  I found it after searching for books on Goodreads, and we were able to borrow a fresh copy from the Oakland Public Library.

Our librarian described the book as silly and quirky, and it sure was. The strange and interesting story, plot and events fit right in with our child's personality.  The story follows a quiet girl named Bicycle who has no need for friends.  In order to avoid the terrifying Friendship Factory, she embarks on an adventure across the country to meet and become friends with her hero, a professional bike racer.  Along the way, she learns that it helps a lot to have friends.

It's a tale, loosely based on the author's own experience riding across the country, full of interesting characters, difficult challenges, and funny coincidences. It was especially relatable for us as a family who bikes. One morning, a chatty stranger hung with us for a while on the ride to school. After he continued on his journey, we remarked about how he was chatty like the sponge-selling guy.  Thirsty and tired while going up a steep hill?  That's like when Bicycle was crossing the Rockies.  A cookie for a treat at the end of a ride?  The Cookie Lady would be pleased.  Don't know what to say?  How about "sandwich"?

It truly reads as an adventure.  In our kid's words. "A little girl gets lost and ends up in a monastery.  And she bikes a lot.  And meets friends along the way.  Some parts made me laugh, and some parts made me scared.  The book teaches people to persevere.  Bicycle meets more friends and she learned to speak a little bit of Polish.  I think people who like biking and funny things would like this book."

It has some challenging words for a younger child, and we read most of it to them as the reading level of the book is geared more towards later-elementary school and middle school-aged readers.

Christina Uss's fiction is sort of based on her own life experience.  It somehow makes it more enjoyable to read her work as an adult (while your child laughs uncontrollably at something silly), as you know she's been through it.

Erik Vs. Everything - Christina Uss

"A scared kid's older sister tries to get her little brother to be less scared."

We loved The Adventures of a Girl Called Bicycle so much that we read another of her fiction books next.  Erik is a afraid of everything, but the rest of his family is afraid of nothing.  His sister embarks on a mission to help him conquer his fears.  Readers learn that it's okay to feel anxious and terrified of squirrels.  But he learns (with the help of some mountain biking) that he is not helpless and can overcome his fears.  There were many moments with squeals of laughter that we enjoyed while reading this book.

Through all of the adventures, the family sticks together and help each other out.  It's a good book for "somebody who wants to become braver and who wants to laugh.  It's funny and was an adventure.  It teaches people to not give up, and it used big juicy words."

A children's librarian at the New York Public Library has put out this list of children's books featuring bicycles. They range from picture books (Do You Like My Bike? by Norm Feuti), Chirri & Chirra: On the Town by Kaya Doi) to novels for older children, such as The Bicycle Spy by Yona Zeldis McDonough (also in Christina's list below!) and graphic novels (This Was Our Pact by Ryan Andrews) and nonfiction (Major Taylor, Champion Cyclist by Lesa Cline-Ransome).  It's a nice, wide-ranging list with something for every child.

Author Christina Uss has a nice list of bicycle books on her website.  We've added many of her suggestions to our GoodReads list.  A few that we want to read:

Mr. Limata is a local Oakland teacher who rides his bike and reads for children worldwide on his Facebook and YouTube channel.  He recently rode in the Ride 4 a Reason bike ride to raise funds for Oakland's public schools and read some bicycle related books to celebrate Earth Day.

Recently, he has read:

Other bicycle books we want to read but haven't yet