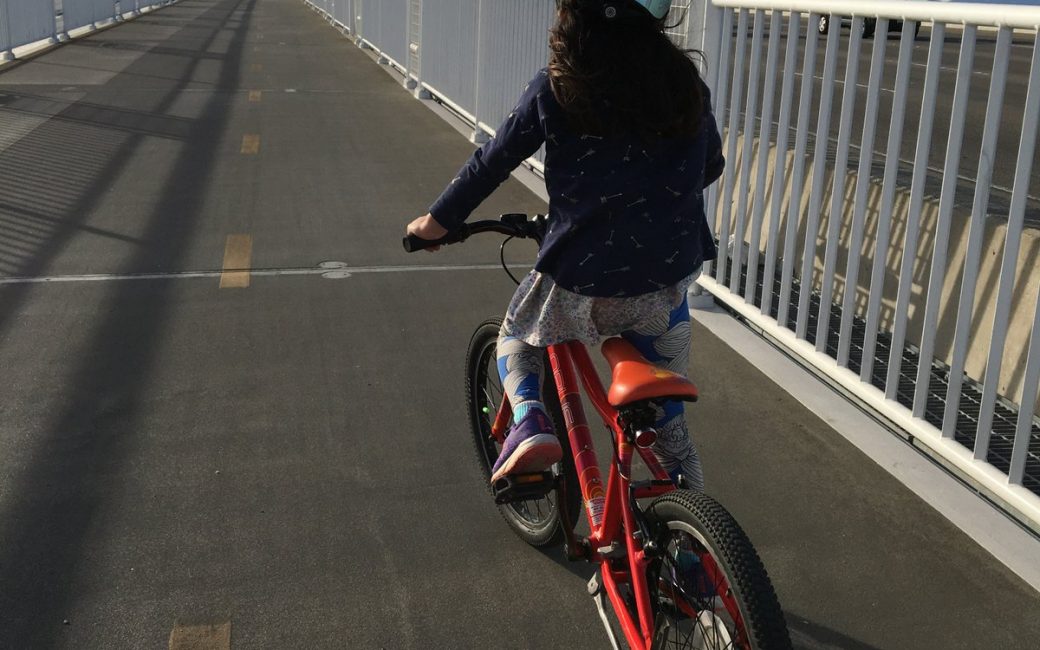 If you've been riding your bike for a while, you've probably heard some variant of "Get off the road!" coming from an irate driver more than a few times.  (There are a lot of links out there that try to answer the question, "Why do people shout at cyclists?") Though it can be at best unpleasant to hear, I do wish that it was easier to ride on a dedicated path that's not shared by automobiles.  Reducing the idea of bicycling to solely a recreational activity has made it harder for people to safely ride as a mode of transportation.  And without a network of routes to reach areas where people can ride bikes for recreation, people often need to put their bikes in or on their cars, and drive to a destination.  I think that many people want to reduce their car usage and in turn reduce their impact on the environment, and making it harder to ride a bike to where one needs to go makes that goal more difficult.

Sharing a road with automotive traffic is often stressful, and most people would ride their bikes more if they were able to feel safer while riding. I remember riding to UC Berkeley with friend who was visiting from out of town for a few days.  I had complete forgot how terrifying it can be to hear the sound of a car engine passing and knowing that you could be passed fairly closely.  We had to stop and turn around.

There are some nice dedicated paths in the Bay Area, for example the Bay Bridge path,  Iron Horse Trail (a 32-mile multi-use trail between Concord and Pleasanton) and the Delta De Anza trails come to mind, but trails like these are fairly sparse in the USA.

We haven’t traveled internationally much in the last 5 years, but it’s always fascinating to see how other countries address multi-modal transportation. While on an old work trip in Amsterdam, I remember being amazed at the separate bike paths that ran parallel to highways in the Netherlands. I’ve also admired the infrastructure in parts Sweden, Denmark and Germany. Cities like Paris have invested a lot in cycling infrastructure during the pandemic as transportation modes have shifted. We’re grateful that the city of Oakland had added 21 miles of “Slow Streets” that are open to automotive traffic for residents and delivery vehicles but closed to thru-traffic. These slow streets give children safer (from traffic and in the COVID sense) outdoor space to learn to ride and others safer routes to travel.

We’ve also benefited from protected bike lanes on Telegraph Avenue and in Berkeley, on Hearst Avenue and others . They add space and physical barriers via plastic bollards. Driveways and intersections still feel risky, but riding on these streets with kids has been upgraded from “avoid at all costs” to “still a little scary but doable”.

1 thought on “Bicycle infrastructure and riding with children”