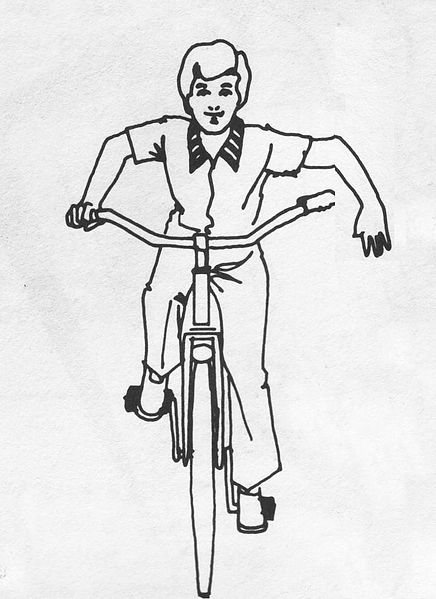 Contents hide
1 Bike laws and traffic laws for people on bikes, in cars, and people who walk in the state of California
2 General principles
2.1 Your space on the road
2.2 Ride with traffic, not against it
2.3 Rules for right of way at intersections
2.3.1 Controlled intersections
2.3.2 Uncontrolled intersections
2.4 Rules for right of way for lane changes
2.4.1 SCAN
2.4.2 SIGNAL
2.4.3 MERGE
2.5 Slower traffic on the right
2.6 Where do I ride in the lane?
2.7 Take the lane
2.8 Obey traffic signs
3 Laws as they relate to bikes in California
3.1 Laws for people riding bikes in California
3.1.1 Helmet laws in California:
3.1.2 Riding your bike on the sidewalk:
3.1.3 Laws regarding bike lanes:
3.1.4 Headphone/earbud laws:
3.1.5 Laws regarding how you set up your bicycle:
3.1.6 Reflector on front wheel or front of bike (white or yellow) & rear wheel or rear of bike (white or red) or reflectorized tires (CVC 21201)
3.1.7 DUI:
3.2 Laws for California drivers, as related to bikes
3.2.1 Driving in the bike lane:
3.2.2 3 foot law:
3.2.3 Dooring laws:
3.3 Laws for pedestrians
3.3.1 Pedestrians have the right of way in crosswalks
3.4 Weird bike laws
3.4.1 No cycling with a slingshot in your pocket in Bellingham, WA
3.4.2 No acrobatic or fancy riding in Galesburg, IL
3.4.3 No riding over 65mph in Connecticut
3.4.4 No gargling mouthwash while cycling in Peridot, AZ
3.4.5 No riding your bike hands-free in Colorado
3.4.6 I’m trying to make it easier for families to ride bikes together by sharing experiences and developing helpful products.
3.5 Or follow along for updates:
3.5.1 Instagram
3.5.2 Twitter
3.5.3 Facebook
3.5.4 Related Posts:

Bike laws and traffic laws for people on bikes, in cars, and people who walk in the state of California

I just finished a League of American Cyclists training course, and was really impressed with the depth of information covered in the course.  One important aspect of the training is the law as it relates to how people share the roadways.  This reflects traffic principles, bike laws, and infrastructure in their current state.  I'm hoping there can continue to be improvements that will make it easier for people to walk and bike to get to where they need to go without the fear of being hit by a car.  You shouldn't be required to drive a 5000 pound vehicle to pick up a loaf of bread and 12 eggs from a grocery store.

I'm still learning, and am definitely open to any corrections, different interpretations, and differences in different states.  Feel free to let me know in the comments.

I am not a lawyer and remember that this does not constitute legal advice and is a general summary of research I've done so far.  If you need a lawyer, here are some resources:

Traffic and bike laws are generally derived from a few general principles.  These principles are also good to follow so that you can ride your bike safely to get where you need to go.

Your space on the road

Ride with traffic, not against it

In the USA, traffic generally moves on the right side of the road.  For someone on a bike, it means "ride as far right as practicable", where "practicable" is generally interpreted as "safe and reasonable".  The law does not require that you ride so far to the right that you put yourself in unsafe situations!

This also means that someone on a bike should not ride against traffic.  It's not safe because it gives everybody less reaction time, and it is unlawful.  There is a small exception: Contraflow bicycle lanes.  These are lanes where there is 2-way bicycle traffic and where a bike traffic lane may oppose a car traffic lane.  Contraflow lanes usually have physical barriers between lanes to prevent head-on collisions.

Rules for right of way at intersections

There are places such as intersections and lane changes where some people on the road may need to yield in order to make sure everyone has a safe amount of space on the roadway.

Rules for right of way for lane changes

When on your bike, look, and then wait until you can find a gap.  An easy way to remember this is:

There are a few conventions for bike signaling.  I find the easiest and most obvious to be to point in the direction you are going.

Change lanes when you see a large enough gap to safely do so.

Slower traffic on the right

Your speed determines your general position on the road.  Slower traffic usually moves to the right, and parked vehicles are usually farthest to the right.  If you need to pass, the convention is to pass on the left side.

There are exceptions!  If you are riding your bike in a marked bike lane, it is your right to pass slower moving traffic on the left.

Where do I ride in the lane?

You can choose your position within a lane so you can operate your bike safely.  Bike laws in California state that you should ride your bike as far to the right as practicable.  This does not mean that you need to yield space to cars.  It is often not safe to ride as far to the right as you can.  There is often debris and other hazards such as parked vehicles, poor roadway conditions, and so on.  You may also end up in the "door zone", a spot where someone may open their car door when exiting a parked vehicle.  Door zone collisions are usually bad and sometimes tragic.  Note: A person in a car is legally obligated to not open their car door unless it is safe to do s.

If the road isn't wide enough for you to ride side by side with a car (it often isn't, unless the road is 14 feet wider or more) or if there is no bike lane, you can take the lane.  When you're riding a bike, you still are legally entitled to your space on the road for operating your bike in a safe manner.

For such roads, you can take the lane.  You can ride in the middle of the traffic lane to deter unsafe passing.  You can position yourself in the lane so that a driver cannot pass you on the right or left while remaining in the same lane as you.  The driver will need to change lanes in order to pass you.

This may sound a little scary, but it also helps make sure you are visible and predictable, and can prevent unsafe passing behavior from others on the road.

This is kind of obvious, but everybody on the road needs to follow the rules posted on traffic signs in order to prevent collisions.

Laws as they relate to bikes in California

There are a subset of laws in California that relate specifically to people who ride bikes.  Here are some of them.

Helmets are required for those younger than 18 years of age.  They are still recommended for everyone else. (CVC 21212)

Riding your bike on the sidewalk:

There are no California state laws that prohibit riding on the sidewalk.  But there are local bike laws that do.  For example:

These codes have generally been written to only allow children to ride on the sidewalk.

It turns out that in California, you are obligated to ride in the bike lane (CVC 21208).  But there are some big exceptions:

You are allowed to use headphones or earbuds when riding a bike in California.  But you may not use headphones in both ears. (CVC 27400)  This rule applies to drivers as well.

Laws regarding how you set up your bicycle:

Here are a few laws regarding how you set up your bike.  Some are a little weird and obscure sounding, and others are exactly what you'd expect.

Laws for California drivers, as related to bikes

Driving in the bike lane:

Generally, it's a problem for any car to be in the bike lane.  A lot of drivers misunderstand or don't care for their purpose and use bike lanes to park, get around traffic, or to check on their phones.  This is not legal.  However, drivers are allowed to and sometimes required to, by law at least, drive in the bike lane.  Drivers are supposed to merge into the bike lane before making a right turn.  This is supposed to be safer for everyone, as a driver would first need to yield to someone on a bike in the bike lane, then make the right turn.  This can prevent right hook crashes, where a driver makes a right turn without yielding to bicycle through-traffic. (CVC 21209)

As a person on a bike, you can merge to the left out of the bike lane in order to pass a driver who is making a right turn from the bike lane.

This is a new-ish law, passed in 2013.  This law requires that drivers give at least 3 feet of clearance when passing someone on a bike. (CVC 21760).  There are exceptions.  If there aren't 3 feet available to pass, the driver must slow down and pass only when safe to do so.

When you're riding a bike, you have the right to ride in a safe position, and this includes not riding in the door zone.

Drivers are not to open their door unless it is safe to do so and does not interfere with moving traffic.  It is also not lawful to leave the door open for an extended period of time (longer than necessary to load or unload passengers) (CVC 22517)

First off, a pedestrian isn't just someone who is walking on a sidewalk.  A "pedestrian" according to state law may also include people on roller skates, skateboards, and mobility aids (tricycles, wheelchairs).

Pedestrians have the right of way in crosswalks

Pedestrians generally have the right of way in any crosswalk, marked or unmarked (for example, an intersection where there is a sidewalk or trail but no paint markings).  The only exception to this rule is that pedestrians must yield to any immediate hazard before entering a crosswalk.  The specific wording in California state law is, " No pedestrian may suddenly leave a curb or other place of safety and walk or run into the path of a vehicle that is so close as to constitute an immediate hazard" (CA 21950)

There are a few obscure bicycle laws out there, or maybe "laws" that have somehow entered urban legend status.  I tried to verify all of these to see, and I couldn't do so with all of them.

No cycling with a slingshot in your pocket in Bellingham, WA

I could not verify this one.  Any reference to this was an article listing weird bike or traffic laws.

No acrobatic or fancy riding in Galesburg, IL

This is real!  There are laws in Galesburg against "Trick Riding". (Galesburg 73.15)

"No rider of a bicycle shall remove both hands from the handlebars, or feet from the pedals, or practice any acrobatic or fancy riding on any street. "

No riding over 65mph in Connecticut

This is true, but it doesn't look like a law specific to people who ride bikes.  I think that generally no vehicle is permitted to travel faster than 65mph on the roadway.

No gargling mouthwash while cycling in Peridot, AZ

I could not verify this one either.  Once again, all references I saw regarding this law were in compilations of weird laws.

No riding your bike hands-free in Colorado

You are not allowed to ride "without the handlebars" in Colorado, it's true.  However, this is true in many other states as well.