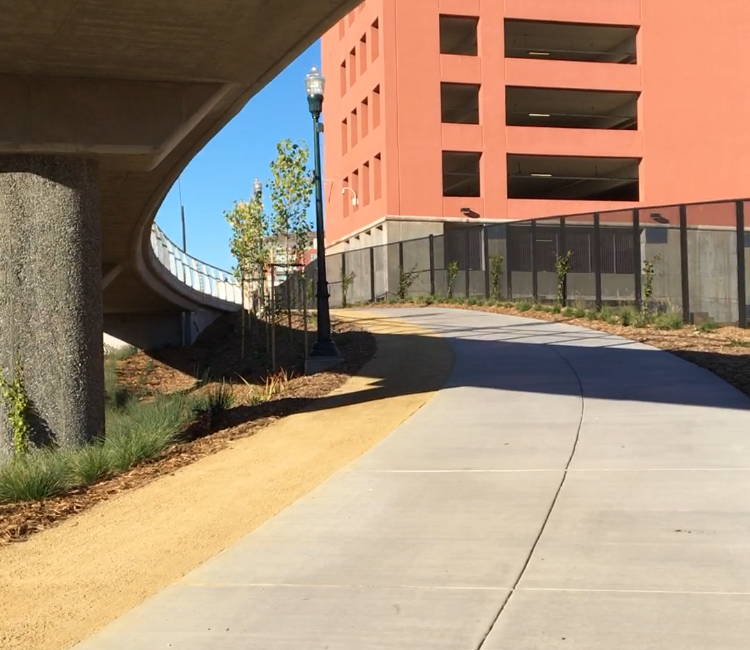 I took my first ride across the Emeryville bike and pedestrian bridge recently.  It just opened on December 3rd.

According to the Emeryville Eye, the idea was first officially conceived in the 1980s.  It's amazing that it has taken this long.  But it is very nice.

Its official name is the "South Bayfront Bridge" and it has been a work in progress since 2002 and cost $21 million.  At one point, the city of Emeryville had to sue the state to recover funds for the bridge.  The bridge connects the Bay Street shopping area on the west (and even has an entrance to the parking lot from the ramp up the bridge) and Horton Street on the east side, just south of 53rd street.

The bridge makes crossing the railroad tracks much much easier.  Previously one would have to cross about a half a mile north on Powell St or about 3/4 miles south on Shellmound.  And each of those pathways involved extra travel to to get onto the bridge.  This made it really annoying and difficult to ride a bike or walk across the train tracks.

When I rode across, there seemed to be an equal number of people on bikes as walkers.  The fact that this bicycle infrastructure was closed to motor traffic was really special.  It's a weird emotional thing.  The fact that it's a pedestrian and bike bridge signifies that a city cares about moving people who aren't driving cars as well.

Here's a hyperlapse (4x speed) video of the ride across, from the west span to the east!