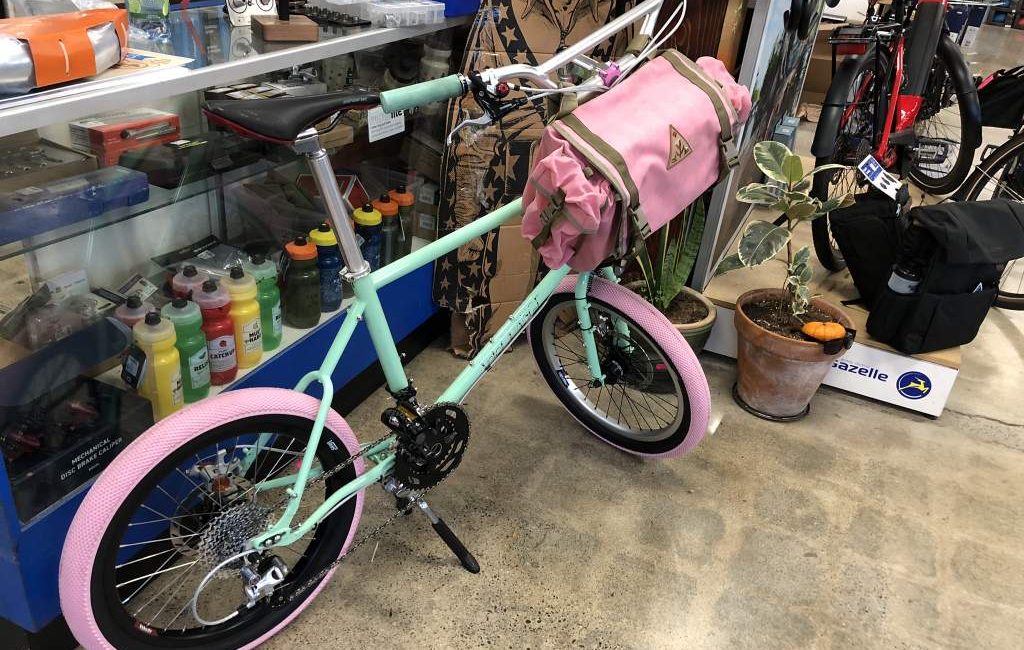 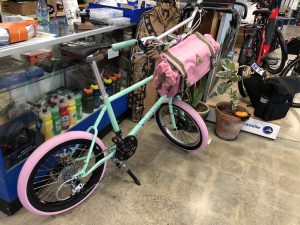 Blue Heron Bikes is a fun bike shop to visit

I went to Blue Heron Bikes to buy a new spoke and checked out their bike selection. I saw a bunch of Urban Arrows, a Velo Orange Minivelo, and the new Tern Short Haul. Not pictured is the Yuba Fastrack, which looks really good.  Blue Heron Bikes has a ton of cargo bikes, folding bikes, and e-bikes, and is perfectly situated in North Berkeley along the Ohlone Greenway bike path.

A note about the Ohlone Greenway:

It's a commuting route as well as a recreational route for people who walk, bike, run, and roll.  It mostly follows the BART tracks and probably exists because it was formerly a railroad right of way.  It's 4.5 miles long (wish it were longer).  It is punctuated by a decent number of cross streets, so if one is in a rush, it might be faster to ride a bike on a parallel street with less stop signs.  But the Ohlone Greenway is calmer and car-free, and therefore generally lower-stress. 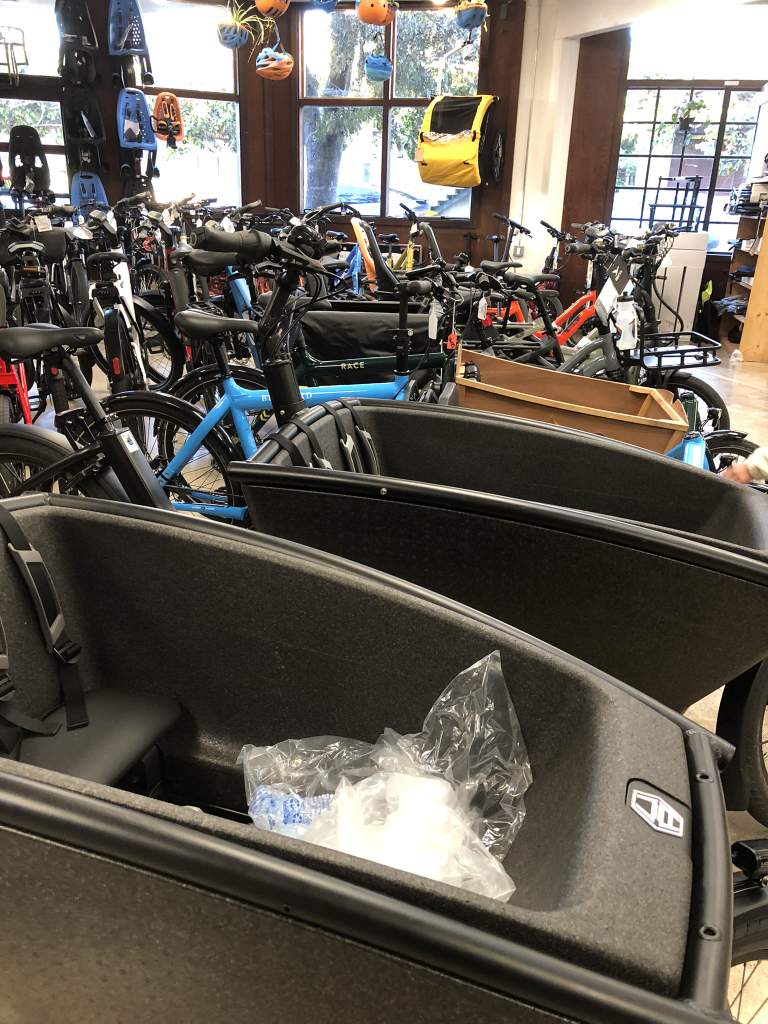 The shop still had some fun Halloween decorations up, and hanging helmets had been converted into planters for hanging plants.  On the shop floor was an impressive set of Urban Arrow Electric bikes, including some of the Family line bikes.  These front loader bikes have a Bosch electric assist (usually with 250W motors) and can carry multiple humans in the front. They have integrated lights, fenders, and a kickstand. They're serious cargo bikes that can function as car replacements, or even as an upgrade to driving a car.  Lots of parents use these to take their kids to daycare and elementary school.

These bikes sell for $7000-9500 - not cheap compared to other bikes.  But considering that the average new car sells for $48,000, you can get a vehicle with half the utility or more for a quarter of the price or less.  And you'll pay much less for gasoline/charging while releasing less carbon dioxide into the air and you'll be less likely to accidentally hurt someone else on the road.

Blue Heron Bikes had a little bit of everything. They have a few trailers for towing your child that attach to the back wheel of your regular bike or ebike.  They also have a bunch of child seats, mostly Thule/Yepp models, for carrying your child on your bike behind your seat or in front of you on top of your handlebars. 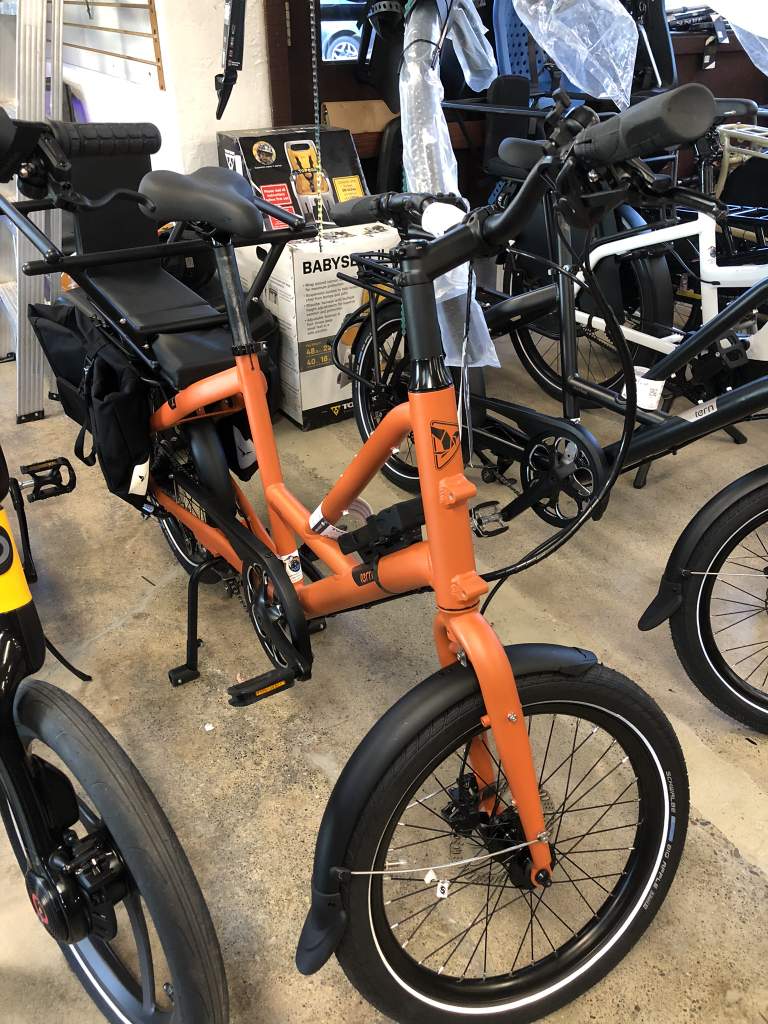 It was nice to see a Tern Short Haul in real life!  The Short Haul is a non-folding bike and non-e-bike. ("Acoustic"? "Classic"?)  Blue Heron Bikes has the electric GSD (an e-family bike that can fit a bunch of cargo or two kids on the back) and the HSD (a smaller e-bike that is still quite capable of carrying cargo and one kid on the back).  Both have Bosch motors as well.

The Short Haul is a neat take on a cargo bike. It's small, but can carry more stuff than a normal bike. I ride a Tern folding bike often and like the smaller 20" wheels that it has and that the Tern Short Haul shares.  The rear rack of the Short Haul is rated to carry 110lbs, so it's capable of carrying an extra non-full-size passenger and/or a bunch of cargo, like a load of groceries.

Blue Heron bikes also sells the single passenger electric Tern bike, the Vektron, as well as some of their folding bikes like the Link A7. 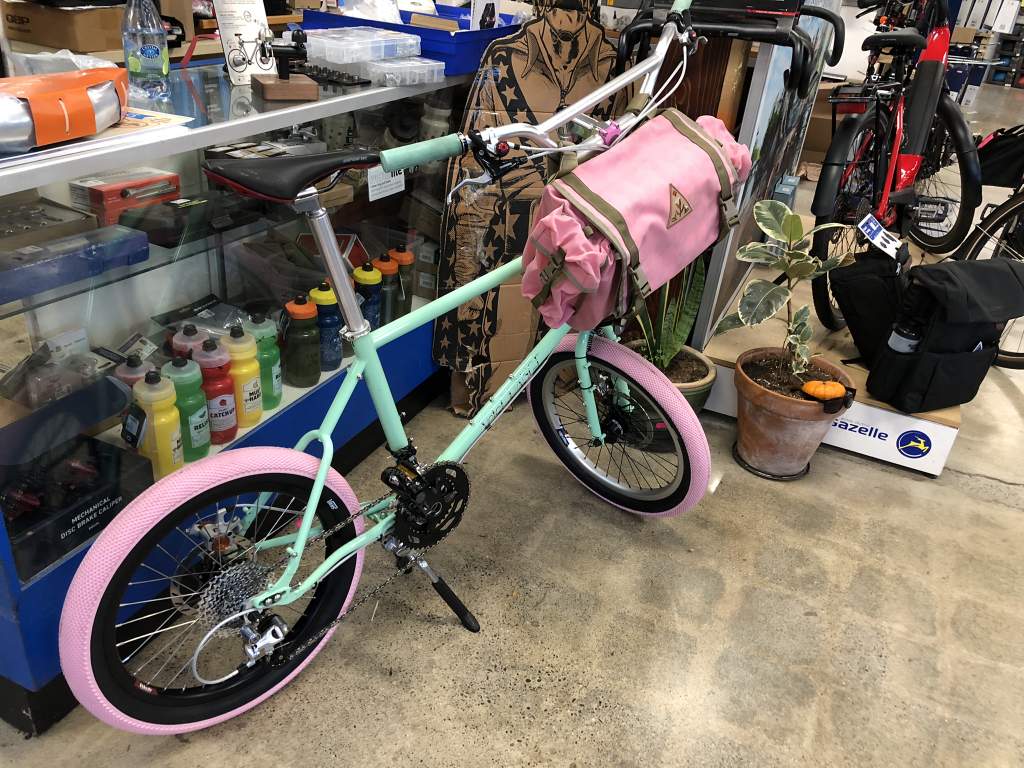 This Velo Orange Neutrino minivelo was built up with a minty-green paint job and bright pink tires.  The handlebar bag in front matches the tires and so does the stem face plate.  The handlebar grips match the frame too.  What a nice build.

The minivelo style is a kind of more portable bike.  Many have smaller 20" wheels and though they can fit a full-sized human, they have a smaller footprint so that they are easier to store in smaller places.  There are not too many of them in the States; they seem more common in Asia. I've seen the Velo Orange Neutrino, the Mercier, a Soma, and some of the Tern Surge series bikes in Indonesia.

While admiring the bike, my kid noticed the Spurcycle water bottles in the display case. "Relish your ride" "Faster! Catch up" and "Must (go) Hard"

My spoke was ready by the time we were done wandering around the shop, and we headed back out of Blue Heron Bikes onto the Greenway to continue the ride to our friends' house.